A Life on the Gridiron

Glenn Scobey “Pop” Warner (1871–1954) stands among the giants of the coaching profession, alongside Knute Rockne, Amos Alonzo Stagg, George Halas and Vince Lombardi. Warner turned a ragtag team from a Carlisle, Pennsylvania, Indian boarding school into a national power and later won multiple national championships at the University of Pittsburgh and Stanford. His 319 victories made him one of the winningest coach in college football history.
A pioneer of the forward pass, he is credited with inventing the single-wing formation—widely considered the genesis of modern-day offense—as well as the double wing, the three-point stance for backs, the naked bootleg and the spiral punt. He also developed improvements to shoulder pads, tackling dummies, blocking sleds and much more.
The book traces Warner’s rise from his small town roots to becoming one of the most influential coaches in football, a man who helped refine the sport from a tedious, push-and-shove affair into the dynamic, high-speed game of today.

“a comprehensive and informative look at Warner’s career…Miller has written an impressive book on Pop Warner…highly recommend”—Gridiron Greats; “Miller’s work is, quite simply, a touchdown. The book does far more than glorify all that Warner did for the game”—Sport in American History; “presents the most-definitive-to-date biography of Glenn Scobey ‘Pop’ Warner. The author fleshes out a fuller picture of Pop’s personality and the personal life of the man who reshaped the game of football”—ProtoView. 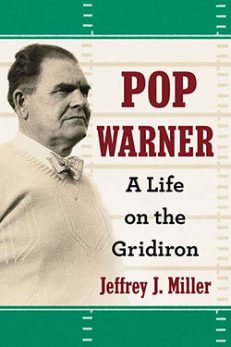