Memoir of a Vietnam Veteran Against the War, rev. ed.

From 1969 to 1974 Ehrhart was just Passing Time. His reentry into the “world” began with his enrollment as a 21-year-old freshman (and token Vietnam vet) at Swarthmore College. At first simply trying to bury his past, Ehrhart slowly if inexorably came to understand what happened to him, and why, in Vietnam. Interspersed are flash-backs to the war itself.
It is the story of political—and personal—awakening. As the war dragged on, the United States’ deceitful involvement and its perpetuation of fallacies and lies about the war’s conduct forced Ehrhart to confront his own feelings about his government, country, and self. Throughout, the reader shares with Ehrhart his odyssey through naivete, growing awareness, angry withdrawal and, finally, a measure of peace.

Memoirist, poet and editor and former Marine W.D. Ehrhart taught English and history at the Haverford School in Haverford, Pennsylvania. The author of twenty books, his prose and poetry have appeared in hundreds of publications including the Los Angeles Times, Cleveland Plain Dealer, Utne Reader, Reader’s Digest, American Poetry Review and the Virginia Quarterly Review. He was a major presence in the Ken Burns and Lynn Novick documentary The Vietnam War. 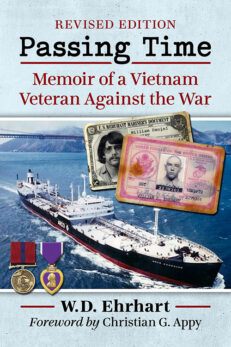