This essay collection explores the life and work of science fiction doyen Ray Bradbury from a variety of perspectives. Noting the impact of the Southwest on Bradbury, some of the essays analyze Bradbury’s southwest metaphors: colonial pollution of a pristine ecology, the impacts of a colonial invasion upon an indigenous population, the meeting of cultures with different values and physical aspects. Other essays view Bradbury via the lens of post-colonialism, drawing parallels between such works as The Martian Chronicles and real-life colonialism and its effects. Another essay views Bradbury sociologically, analyzing border issues in his 1947 New Yorker story “I See You Never,” written long before the issue of Mexican deportees appeared on the American literary horizon. From the scientific side, four essays by astronomers document how Bradbury formed the minds of many budding scientists with his vision. On August 22, 2012, the Martian landing site of the Curiosity rover in the Gale Crater was named “Bradbury.” This honor shows that Bradbury forms a significant link between the worlds of fiction and planetary science.

Gloria McMillan is a research associate at the University of Arizona and teaches English and literature at Pima Community College in Tucson, Arizona. She lives in Tucson.

Prescient Border Crossing: “I See You Never” and the Undocumented Mexicans Americans Prefer Not to See (Marleen S. Barr) 39

A “Night Meeting” in the Southwest: Hospitality in Martian Chronicles (Adam Lawrence) 70

Loss in the Language of Tomorrow: Journeying Through Tucson on the Way to “Usher II” (Aaron Barlow) 105

The Desert Is Earth and Mars: An Ecocritical, Bachelardian Exploration of “And the Moon Be Still as Bright” and It Came from Outer Space (Christopher Cokinos) 133

The Exploration of Mars: An Unintentional Invasion? (David M. Acklam) 164

The Naming of Names (Christopher P. McKay and Carol Stoker) 181

De-Alienating the Alien: The Limits of Empathy in NBC’s The Martian Chronicles Miniseries (Paul Cote) 193

“a fresh, wide-ranging investigation…interdisciplinary approach is brilliant…a most worthy addition to the library of any reader or institution…engaging and interesting. McMillan has collected a refreshing wide variety of essays addressing previously unexplored topics of Bradbury, place, race, and even the actual Mars itself from disparate and enlightening perspectives”—SFRA Review; “McMillan has curated what are important contributions in Bradbury studies, partially filling a gap while crafting a cross-disciplinary love letter to Bradbury’s memory”—Journal of American Culture; “a distinguished cast of scholars contributes to this powerful and intricately knit exploration…a valuable academic resource…each essay is packed with astute analysis and extensive research…the book provides a lasting contribution to Bradburry studies”—Science Fiction Studies; “a fine addition to the literature of Bradbury analysis, this book will appeal to scientists and non-scientists alike, and all those who have a fascination with Mars”—Sun News Miami. 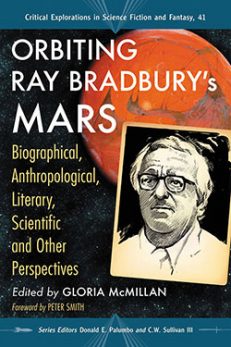