Of Gods and Monsters

While Universal’s Dracula and Frankenstein (both 1931) have received the most coverage of any of the studio’s genre releases, it is the lesser known films that have long fascinated fans and historians alike. Starting with The Last Warning, a 1929 movie released as both a silent and a talkie, Universal provided a decade of films that entertained audiences and sometimes frustrated critics.
Each of Universal’s horror, science fiction and “twisted mystery” films receives an in-depth essay for each film. The focus is first on the background to the making of the movie and its place in the Universal catalog. A detailed plot synopsis with critical commentary follows. Filmographic data for the film conclude the entry. Universal’s The Shadow short film series is covered in an appendix. Many rare illustrations and movie posters are also included.

John T. Soister is a teacher of modern and classical languages, and lives in Denver, Colorado.

Introduction: In the Beginning There Was Carl     5 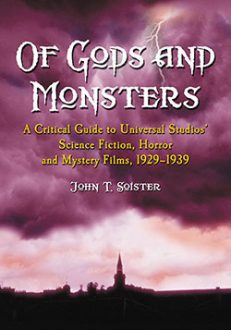