Nine Innings for the King

On a sunny Fourth of July during World War I, King George V went out to a ball game. Along with Queen Mary and other royalty, Winston Churchill, dozens of VIPs, thousands of troops and ordinary Londoners, the monarch cheered an extraordinary “baseball match” between American soldiers and sailors. This historic event helped solidify the transatlantic alliance that was vital to winning the war.
The game itself was a thriller, reported throughout the English-speaking world. The players ranged from kids fresh off the sandlots to a handful of major and minor leaguers and a future Hall of Famer. The two veteran pitchers went the distance, the outcome in doubt until the last batter. Drawing on American and British sources and game-day coverage, this first-ever full account of the “King’s game” records every play and explores the lives of several players. The author provides a brief history of the Anglo-American Baseball League and armed forces baseball played in England, France and the United States during the Great War.

Author and editor Jim Leeke is a contributor to the SABR Baseball Biography Project and the creative director of Taillight Communications. He lives in Columbus, Ohio.

• “This carefully researched, colorfully written history recounts the details surrounding an exhibition ballgame between American soldiers and sailors that took place at London’s Stamford Bridge Football Grounds on Independence Day during the First World War…. Jim Leeke underscores the game’s significance by noting that it “helped solidify the British-American alliance that still endures” and by boldly asking, ‘What other sporting event has made a contribution half so vital to the national interests of the United States?’”—NINE: A Journal of Baseball History and Culture

• “Fun, easy reading…this book is peppered with pleasing little anecdotes…if you are a baseball fan and Great War historian, you should read this book”—Roads to the Great War

• “Leeke creates an enjoyable read with prose that holds the reader’s interest…. After reading this book, one feels like they were present in 1918 and got to see and experience the drama and excitement around the game played at Stamford Bridge. Any lover of baseball history will learn something form this book”—H-Net Reviews

• “Splendid. From a dusty newspaper box score published in the armed forces newspaper Stars and Stripes, Leeke builds the tale of the game, the players, the spectators, and the playing field into a narrative that is difficult to put down. Leeke painstakingly reconstructs the game action, inning-by-inning and pitch-by-pitch” —Paul Langendorfer, The Inside Game (SABR Deadball Era Committee Newsletter)

• “With a witty, crackling style, Jim Leeke tells the story of the most historically dramatic baseball game of all time. And there’s plenty of solid research behind his engaging newshound-on-the-scent prose. Nine Innings for the King should be on the bookshelf of every baseball fan and anyone interested in the sometimes surprising appearances our National Pastime has made on the international stage.”—L.M. Sutter, author of Arlie Latham: A Baseball Biography of the Freshest Man on Earth 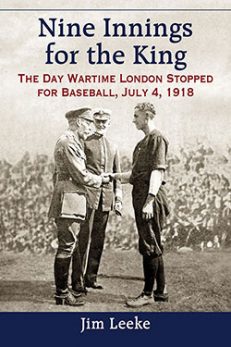 You're viewing: Nine Innings for the King $29.95
Add to cart