A History and Filmography

Hitler and the Nazis saturated their country with many types of propaganda to convince the German citizenry that the Nazi ideology was the only ideology. One type of propaganda that the Nazis relied on heavily was cinematic.
This work focuses on Nazi propaganda feature films and feature-length documentaries made in Germany between 1933 and 1945 and released to the public. Some of them were Staatsauftragsfilme, films produced by order of and financed by the Third Reich. The films are arranged by subject and then alphabetically, and complete cast and production credits are provided for each. Short biographies of actors, directors, producers, and other who were involved in the making of Nazi propaganda films are also provided.

Rolf Giesen, a former visiting professor at the Animation School of the Communication University of China in Beijing, has compiled a special effects collection for Deutsche Kinemathek in Berlin and has co-written several animation features. He is president of the Jilin Animation, Comics and Games Museum in Changchun, China.

11 Götterdämmerung: Kolberg and the Fall of the Third Reich     163 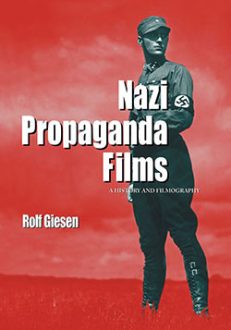