Milton, Spenser and The Chronicles of Narnia

In 1950, Clive Staples Lewis published the first in a series of children’s stories that became The Chronicles of Narnia. The now vastly popular Chronicles are a widely known testament to the religious and moral principles that Lewis embraced in his later life. What many readers and viewers do not know about the Chronicles is that a close reading of the seven-book series reveals the strikingly effective influences of literary sources as diverse as George MacDonald’s fantastic fiction and the courtly love poetry of the High Middle Ages. Arguably the two most influential sources for the series are Edmund Spenser’s The Faerie Queen and John Milton’s Paradise Lost. Lewis was so personally intrigued by these two particular pieces of literature that he became renowned for his scholarly studies of both Milton and Spenser. This book examines the important ways in which Lewis so clearly echoes The Faerie Queen and Paradise Lost, and how the elements of each work together to convey similar meanings. Most specifically, the chapters focus on the telling interweavings that can be seen in the depiction of evil, female characters, fantastic and symbolic landscapes and settings, and the spiritual concepts so personally important to C.S. Lewis.

Elizabeth Baird Hardy is an English instructor at Mayland Community College in Spruce Pine, North Carolina, where she was chosen as the 2006 outstanding faculty member. She lives in western North Carolina.

I. The Depiction of Evil: Women of Power and Malice      17
II. The Depiction of Evil: Men, Mortals, Monsters, and Misled Protagonists      51
III. Girls Whose Heads Have Something Inside Them: The Characterization of Women      77
IV. An Inside Bigger Than Its Outside: Setting and Geography      107
V. Knowing Him Better There: Spirituality and Belief      135 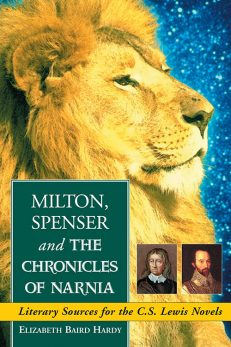 You're viewing: Milton, Spenser and The Chronicles of Narnia $29.95
Add to cart