View cart “Masters of the Grotesque” has been added to your cart.

Masters of the Grotesque

The Cinema of Tim Burton, Terry Gilliam, the Coen Brothers and David Lynch

The concepts and theories surrounding the aesthetic category of the grotesque are explored in this book by pursuing their employment in the films of American auteurs Tim Burton, Terry Gilliam, the Coen Brothers and David Lynch. The author argues that interpreting these directors’ films through the lens of the grotesque allows us1to situate both the auteurs and the films within a long history of the grotesque in art and aesthetics. This cultural tradition effectively subsumes the contribution of any artist or genre that intersects it but also affords the artist or genre—the auteur and the genre filmmaker—a pantheon and an abundance of images, themes, and motifs through which he1or she can subversively represent the world and our place in it.

Schuy R. Weishaar teaches writing and literature at Trevecca Nazarene University in Nashville, Tennessee, and philosophy and film studies at a few other institutions. He lives in Illinois.

Part 3. Menacing Invasions: The Hazards of Time and Subjectivity      113
V. The Mundane and the Catastrophic in the Films of Joel and Ethan Coen      115
VI. Obliterating the Subject in the Cinematic World of David Lynch      140

“I must begin by confessing that Masters of the Grotesque is a book I wish I had written. It is, however, a better book than I ever could have done…more theoretically sophisticated, more incisive, more far-reaching. Weishaar is a gifted writer, able to wrestle big ideas down to earth, drag them out of that very-20th-century Plato’s cave we know as a movie theatre and into the light, putting them to critical use and then plunging back into the cave once again, more than ready to persuade the still-imprisoned of his new understanding.”—David Lavery, Middle Tennessee State University. 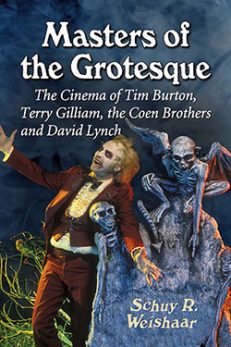 You're viewing: Masters of the Grotesque $25.00
Add to cart