Mark Gruenwald and the Star Spangled Symbolism of Captain America, 1985–1995

From 1985 to 1995, Mark Gruenwald was the head writer for Captain America. During this decade, Gruenwald wrote some of the most essential stories in Captain America’s history and guided the comic through an eventful period of both world history and comic book history. This book dissects the influence of the world at large on Gruenwald’s stories and the subsequent influence of Gruenwald’s work on the world of comics. The book’s ten chapters discuss a wide range of topics including the generational tensions inherent in a comic about a G.I. Generation hero, written by a baby boomer, for an audience of Gen Xers; the enduring threat of the Red Skull and the never-ending aura of World War II; the rising popularity of vigilante characters during the ‘90s; and how Captain America fits into the war on drugs and its “just say no” mentality. Set against the declining American patriotism of the 1980s and 1990s, this book places special emphasis on the symbolism of the most American of superheroes.

Jason Olsen is an associate professor of English at Utah State University. He lives in Price, Utah.

Eight—Justice vs. Justice: Challenges to Captain America’s Code of Honor 187

Nine—Fire and Ice: The Presence and Consequence of Drug Abuse 211

“Olsen’s detailed analysis of Mark Gruenwald’s iconic run on Captain America covers an important period of the Sentinel of Liberty’s history too long ignored by academics. This book will be a valuable addition to any collection of comic book research specifically and pop culture research more generally, as well as a valuable tool in related college courses.”—Dr. Richard A. Hall, pop culture historian 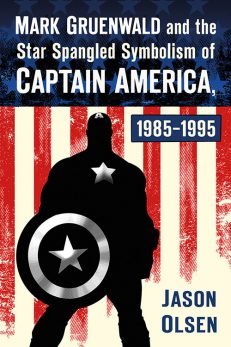