Essays on a Modern Master of Science Fiction and Fantasy

Lois McMaster Bujold has won a shelf full of awards—Hugos, Nebulas, and others—for both her science fiction and fantasy writing. She is one of the most respected names in the field, always delivering polished, thoughtful, and well-crafted writing. She consistently addresses great issues and problems on a human level, where they are faced by quirky, prickly, and very real characters, and her exploration of the theory of reader-response is an important critical contribution. Yet there has been a surprising dearth of serious critical writing about her output—in part because she resists neat and easy classification by genre, politics, or subject matter. This collection of fresh essays aims to correct that situation by presenting critical insights into many aspects of her writing. Attention is given to both her Miles Vorkosigan science fiction series and her Chalion and Sharing Knife fantasy series, as well as the books that fall outside these series.

Janet Brennan Croft is liaison to the school of communication and information and librarian for disability services and copyright at Rutgers University Libraries in North Brunswick, New Jersey. She has written on the Peter Jackson films, J.K. Rowling, Terry Pratchett, Lois McMaster Bujold, and other authors, and is editor or co-editor of five collections of literary essays and edits the refereed scholarly journal Mythlore.

A Note on Editions and Abbreviations 7

Love and Death in the Vorkosiverse: An Interview with

From Both Sides Now: Bujold and the Fan Fiction Phenomenon

The Inﬂuence of Family and Moral Development in Bujold’s

The Soldier and the Cipher: Miles, Mark, and the Naming

The Emperor’s Shoe: Power, Home, and the Other in the

Broken Brothers in Arms: Acting the Man in The Warrior’s

Alternate History of the Spanish Reconquest in the Chalion

(Absent) Gods and Sharing Knives: The Purposes of Lois 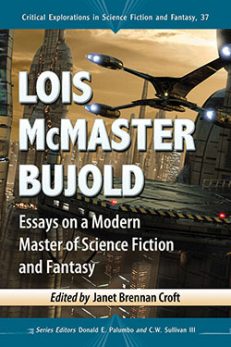