When natural gas was first discovered in Appalachia in the 19th century, its development as a fuel was rapid. Unlike oil and coal, gas could be moved only by pipeline and required large containers for storage. It was not possible to cope with peak loads without adding excessive pipeline capacity until just before World War II, when two sister gas companies developed a plant to liquefy and store natural gas as a liquid; the liquid was then regasified to deal with peak loads.
The liquid is 1/600 the volume of the gas, but it requires storage at an extremely low temperature, 1-260°F. This worked well until 1944, when a liquid natural gas (LNG) tank in Cleveland ruptured and caused a fire with 130 fatalities. The fire did not end the industry but caused it to pause. Over the next few years the problems in materials, design, standards, and siting were solved. The recognition that liquefaction made LNG transportable without a pipeline was the breakthrough. In 1959 a shipload of LNG went from Louisiana to Britain and restarted the LNG industry. It is now a major worldwide energy industry and the topic of this work.

John Hrastar retired from NASA after almost 40 years in engineering and management; he is now an independent aerospace consultant. He lives in Silver Spring, Maryland. 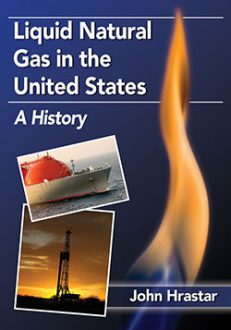 You're viewing: Liquid Natural Gas in the United States $39.95
Add to cart