This book is an exploration of the history and ideology of Revisionist Zionism—the stream of Zionism represented by the ruling Likud Party in Israel—from its inception in the 1920s under Vladimir Ze’ev Jabotinsky through its modification under Herut Party leader Menahem Begin to the present. The main features of Revisionist Zionism under Jabotinsky are discussed, with each of the four Likud Party leaders receiving two to three chapters covering his early life, early career and rise to party leadership and his legacy for the party and the state. An overview is given of the 1940s underground careers of Menahem Begin as leader of the paramilitary organization Irgun Zvai Leumi, and Yitzhak Shamir as leader of the Lohemei Herut Israel. In conclusion the author examines common characteristics that the five leaders share and how the party may evolve in the future.

Thomas G. Mitchell is the author of numerous books on such topics as Israel, Northern Ireland, and antebellum American history. He lives in Madison, Wisconsin.

One.  The Founder—Vladimir “Zeev” Jabotinsky—and the Creation of Revisionist Zionism  5

Three.  A Party Is Born and Grows: From Herut to the Likud  48

Nine.  “You will get him as prime minister”: Sharon as Prime Minister  168 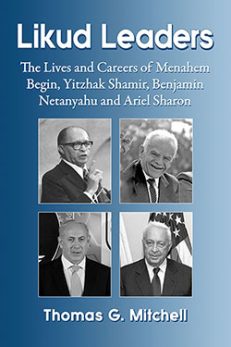