The Long Diplomatic Struggle Between the United Nations and South Africa

After World War I, the League of Nations assigned management of the German colony of Namibia to Britain, which passed control to South Africa as a “trophy” for the country’s support during the war. The League mandated that South Africa prepare the country for independence, but South Africa showed no sign of working toward that goal. The clash over interpretation of the League’s mandate led to 70 years of complicated diplomacy to solve the dispute. This incisive volume offers an in-depth analysis of the political and diplomatic efforts undertaken by representatives of the United Nations, Namibia, and South Africa—with the assistance of the international community, the Organization of African Unity, and Western powers—during the struggle for self-rule in Namibia from 1920 to 1990. This classic example of conflict resolution technique in global and African studies provides a useful template for conflict negotiation around the world.

E. Ike Udogu is a faculty fellow and professor of international, comparative and African politics in the Department of Government and Justice Studies at Appalachian State University in Boone, North Carolina. The author of numerous books, he is the former director of research and publication for the African Studies and Research Forum and a former president of the Association of Third World Studies.

2. South Africa and the United Nations on the Issue of Political Hegemony Over Namibia   36

3. The United Nations and Its Committees on Conﬂict-Resolution Attempts in Namibia   60

4. South West Africa People’s Organization of Namibia and Other Groupings in the Political Development and Contestation in Namibia   80

5. Diplomatic Actions in the Conﬂict-Resolution Scheme   94

6. Military Actions in the Conﬂict-Resolution Operation   117

7. Mediation Effort by Five Western Powers Under the Auspices of the United Nations   131

8. Evaluation and Conclusion of the Conﬂict-Resolution Mission   149

Appendix A: An Interview Conducted with Mr. Theo Ben Gurirab,

SWAPO Chief Representative at the United Nations, on the Diplomatic

Appendix D: UN Security Council Resolution 435 of September 29, 1978, Which Called for a Cease-Fire in Namibia and UN–Sponsored Elections   176

Appendix E: Structure and Deployment of the United Nations Transition

Appendix F: Chronology of International Efforts to Resolve the Crisis   201

Appendix G: The Inaugural Speech of His Excellency President Sam Nujoma on March 21, 1990   203

“a useful resource…a book that should be widely read”—Journal of African History. 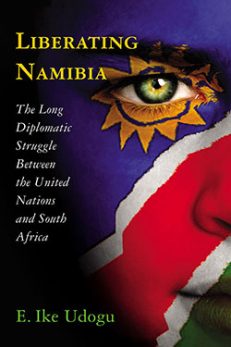