On December 14, 1944, Japanese soldiers massacred 139 of 150 American POWs. This biography tells the story of Glenn (“Mac”) McDole, one of eleven young men who escaped and the last man out of Palawan Prison Camp 10A. Beginning on December 8, 1941, at the U.S. Navy Yard barracks at Cavite, the story of this young Iowa Marine continues through the fighting on Corregidor, the capture and imprisonment by the Japanese Imperial Army in May 1942, Mac’s entry into the Palawan prison camp in the Philippines on August 12, 1942, the terrible conditions he and his comrades endured in the camps, and the terrible day when 139 young soldiers were slaughtered. The work details the escapes of the few survivors as they dug into refuse piles, hid in coral caves, and slogged through swamp and jungle to get to supportive Filipinos. It also contains an account and verdicts of the war crimes trials of the Japanese guards, follow-ups on the various places and people referred to in the text, with descriptions of their present situations, and a roster of the names and hometowns of the victims of the Palawan massacre.

Retired journalist and reporter Bob Wilbanks was vice president of editorial at Stover Publishing Company for ten years. He lives in Urbandale, Iowa. 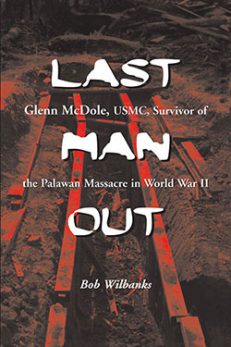