An Illustrated Catalogue of Published Music, 1867–2002

The Ku Klux Klan has received much attention for its violent activities, but comparatively little research has been done on its musical legacy. The printed music that still exists is spread throughout the nation in both public and private collections.
This work presents, chronologically, the music associated with the Klan from 1867 to 2002, thus enabling readers to sense the arguments and attitudes of the Klan as they developed and changed over time. Because of the relative scarcity of Klan–related music, non–Klan music that mentions the word “Klan” is included. These obscure references help place the Klan in a larger social perspective and are very important in documenting anti–Klan musical reaction. In instances where a song merely mentions the Klan, usually in only one verse or in the chorus, then only that verse containing the Klan reference, plus appropriate context, is included. The catalogue also includes Klan–related music that does not have lyrics, such as marches, waltzes, two-steps, and several Klan–related pieces that were published in Europe. Sheet music was virtually nonexistent after the 1930s, so in order to capture a feeling of Klan–related music today, a limited discography of Klan–related recordings from 1920 to 2002 is also included.

Danny O. Crew has been collecting political memorabilia since 1975, specializing in political music. His personal collection exceeds 11,000 pieces. He has written a number of articles on the subject and has been featured on ABCs Good Morning America. He is also the author of Suffragist Sheet Music (2002) and Presidential Sheet Music (2001). He currently serves as City Manager for the City of Miami Gardens, Florida.

Key to Symbols and Abbreviations     xv 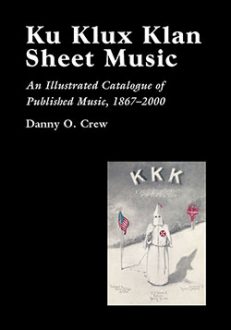