John Henry and His People

The Historical Origin and Lore of America’s Great Folk Ballad

The song “John Henry,” perhaps America’s greatest folk ballad, is about an African-American steel driver who raced and beat a steam drill, dying “with his hammer in his hand” from the effort. Most singers and historians believe John Henry was a real person, not a fictitious one, and that his story took place in West Virginia—though other places have been proposed. John Garst argues convincingly that it took place near Dunnavant, Alabama, in 1887. The author’s reconstruction, based on contemporaneous evidence and subsequent research, uncovers a fascinating story that supports the Dunnavant location and provides new insights. Beyond John Henry, readers will discover the lives and work of his people: Black and white singers; his “captain,” contractor Frederick Dabney; C. C. Spencer, the most credible eyewitness; John Henry’s wife; the blind singer W. T. Blankenship, who printed the first broadside of the ballad; and later scholars who studied John Henry. The book includes analyses of the song’s numerous iterations, several previously unpublished illustrations and a foreword by folklorist Art Rosenbaum.

Professor emeritus of chemistry at the University of Georgia, John Garst has been active in folk music research and field recording since the 1960s. Besides his study of “John Henry” he is an authority on shape-note hymnody and is noted for discovering the historical bases of ballads like “Delia” and “Ella Speed.” He lives in Durham, North Carolina.

• “John Henry and His People is the definitive work on the most famous ballad of all time. With eloquent prose and a keen eye for detail, John Garst traces the history of the ballad and identifies both its location (the Oak Mountain Tunnel in Alabama) and its hero—John Henry Dabney, a black man born on the Burleigh Plantation in Hinds County, Mississippi. Generations of black and white musicians have sung about how John Henry drove steel into the mountain with his ten-pound hammer and beat the steel-driving machine. Thanks to John Garst and his fine book John Henry and His People, we now know the history of this epic ballad.”—William Ferris, Joel R. Williamson Eminent Professor of History Emeritus, University of North Carolina at Chapel Hill

• “Like many folk enthusiasts, I have listened to literally hundreds of recordings of John Henry as a story, a song, and an American legend. In John Henry and His People, John Garst presents a comprehensive and definitive examination of an actual event that may have inspired the song. While that is worth the price of admission, the book takes you on a much deeper journey. It reveals that the storyteller is at times just as mysterious as the story itself. John Henry and His People shows the way this original tragedy became a symbol of freedom that still resonates at the foundation of the American ideal.”—Dom Flemons, The American Songster

• “An impressive piece of detailed research, unusual and admirable in following every byway connected to the ballad of John Henry—people, history, technology, previous scholarship—this volume makes a convincing argument for locating the original John Henry and his story in Alabama.”—Elissa R. Henken, University of Georgia; Fellow, American Folklore Society 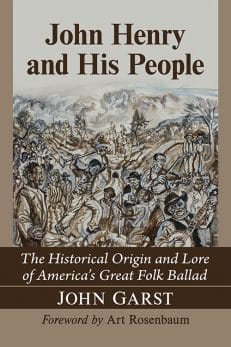 You're viewing: John Henry and His People $39.95
Add to cart