View cart “John Derek” has been added to your cart.

Actor and director John Derek was born in Hollywood, where his striking good looks helped get him a contract with David O’ Selznick. Derek’s career took off after Humphrey Bogart made him his costar in the cultish noir Knock at Any Doors. Derek appeared in such Academy Award-nominated films as All the King’s Men, Run for Cover, The Ten Commandments and Exodus, and worked with directors like Nicholas Ray, Cecil B. DeMille, Otto Preminger and others.

He was a competent, dedicated performer even in his last, trivial roles. In the 1960s, his career in decline, he began directing his own films. Although critics panned the string of movies he made starring his three wives—Ursula Andress, Linda Evans and Bo Derek—some were box-office hits, like Tarzan, the Ape Man. This biography covers his extraordinary life and career, with extensive analysis of his films. 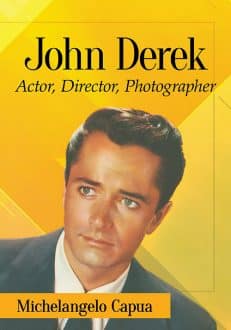