The Calm Morning, Lee’s Telegrams, the Evacuation, the Train, the Passengers, the Trip, the Arrival in Danville and the Historians’ Frauds

In the space of a few hours on the night of April 2, 1865, Richmond, the Confederate capital, was evacuated and burned, the government fled, slavery was finished in North America, Union forces entered the city and the outcome of the Civil War was effectively sealed. No official documents tell the story because the Confederate government was on the run. First there were newspaper accounts—mostly confused—then history books based on those accounts. But much of what we know about the fall of Richmond comes from “eyewitnesses” like Confederate Navy Secretary Stephen Mallory, whose tale became history. A great deal of what has been presented over the years by historians has been plagiarized, invented or misconstrued, and nearly all we have learned of Jefferson Davis’s flight from Richmond to Danville is wrong. This book closely examines all relevant source material—much of it newly discovered by the author—as well as the writers, diarists and eyewitnesses themselves, and constructs a minutely detailed new account that comes closer to what Abraham Lincoln had in mind when he said, “History is not history unless it is the truth.”

“Stewart considers all available source material, including some never before evaluated material, and constructs the most detailed account of the important events of April 2, 1865 currently available”—ProtoView. 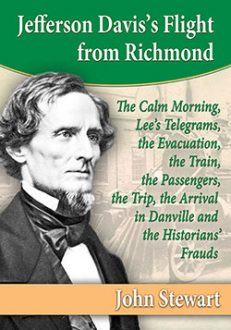 You're viewing: Jefferson Davis’s Flight from Richmond $29.95
Add to cart