Jean Ternant and the Age of Revolutions

A Soldier and Diplomat (1751–1833) in the American, French, Dutch and Belgian Uprisings

Jean Ternant’s life (1751–1833) spanned a period of enormous change in European life. Born when men were still subject to judicial torture, he lived to see the dawn of the railroad age. It was an era of political upheaval: the American Revolution, the “patriot” movement of the Dutch Republic, the Vonckist uprising in the Austrian Netherlands, the French Revolution, the Polish rebellion against Imperial Russia, the Greek war for independence and the struggle for independence in Spain’s South American colonies all occurred during Ternant’s lifetime. He was an active participant in four of them.
The son of a French leather goods merchant, Jean Ternant nevertheless built a public service career in an aristocratic society based on birth and privilege, commanding a regiment in the French army before being appointed minister-plenipotentiary to the United States. His story of public service undertaken for private ends illustrates the value of education and social contacts as well as the importance of luck and circumstances.

Frank Whitney is a former member of the adjunct faculty in the history department at Youngstown State University. He lives in Ravenna, Ohio. 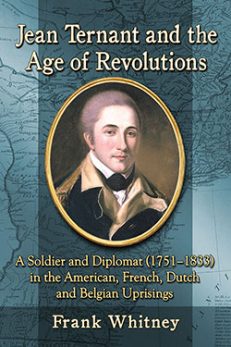 You're viewing: Jean Ternant and the Age of Revolutions $29.95
Add to cart