View cart “Jack the Ripper” has been added to your cart.

His Life and Crimes in Popular Entertainment

The identity of Jack the Ripper has consumed public curiosity since he first tormented the East End of London in 1888. Numerous theories have been offered as to his identity, but he remains in the shadows where, it seems, only imaginative literature has been able to elucidate his meaning to the modern world. This work surveys the literary, film, television, and radio treatments of Jack the Ripper and his crimes. The works of fiction are thoroughly analyzed, as are the major nonfiction works that have offered various theories about the Ripper’s identity. Works whose narratives are obviously inspired by Jack the Ripper and his crimes are also discussed.

Gary Coville and Patrick Lucanio are also the coauthors of Smokin’ Rockets: The Romance of Technology in American Film, Radio and Television, 1945–1962 (2002) and American Science Fiction Television Series of the 1950s (1998), both from McFarland. Coville lives in Dallas, Oregon, and Lucanio lives in Springfield, Oregon. 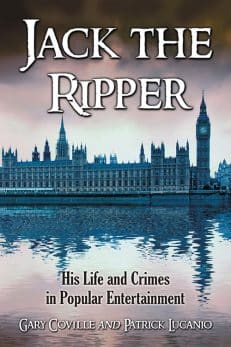