View cart “Jack Coombs” has been added to your cart.

A Life in Baseball

Jack Coombs rose to deadball-era stardom as the ace of Connie Mack’s Athletics, winners of back-to-back world championships in 1910 and 1911. One of the few players of his day to have graduated from college, Coombs debuted for the Athletics in 1906, fresh from Colby College. Within a few years, he was one of the best and best-known pitchers in baseball, leading the majors in victories in consecutive seasons.
But then in 1913 Coombs contracted typhoid fever, a disease that cost the right-hander two seasons at the peak of his career. And while he battled his way back, pitching well in his comeback season of 1915 and then leading the Brooklyn Robins to the World Series in 1916, he was never again the dominant pitcher he had been. Coombs went on to a long career as a coach for Duke University, and wrote one of the most highly regarded instructional books on baseball ever published.

John P. Tierney is a member of the Society for American Baseball Research (SABR). He lives in Southborough, Massachusetts. 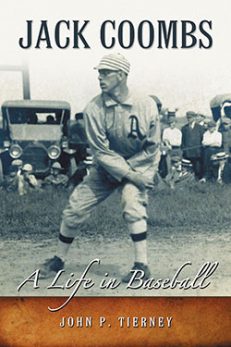