Indiana boasts a rich baseball tradition, with 10 native sons enshrined in Cooperstown. This biographical dictionary provides a close look at the lives of all 364 Hoosier big leaguers, who include New York City’s first baseball superstar; the first rookie pitcher to win three games in a World Series; the man who caught most of Cy Young’s record 511 career wins; one of the game’s first star relievers; the player who held the record for consecutive games played before Lou Gehrig; an obscure infielder mentioned in Charles Schulz’s Peanuts comic strip; baseball’s only one-legged pitcher; Indiana’s first Mr. Basketball, who became one of baseball’s greatest pinch-hitters; the first African American to play for the Cincinnati Reds; the only pitcher to throw a perfect game in the World Series; the skipper of the 1969 “Miracle Mets”; the pitcher for whom a ground-breaking surgical procedure is named; and the only two men to have played in both the World Series and the Final Four of the NCAA Basketball Tournament.

Pete Cava serves as a correspondent for the wire service Agence France-Presse. A veteran of five Olympics (two as a reporter, three as a network television researcher), he is a member of Track and Field Writers of America, the Association of Track and Field Statisticians and the International Society of Olympic Historians. He lives in Indianapolis, Indiana. 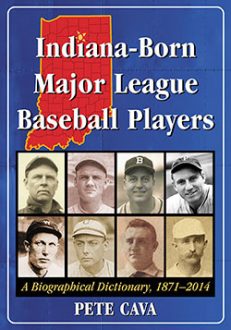