In the Theatre of Dionysos

Democracy and Tragedy in Ancient Athens

Ancient Athens was unique in its politics, extraordinary in its religion and fanatic about its poetry. Yet its creativity peaked in a time of prolonged, avoidable and catastrophic war; the brilliance of Greek tragedy blazed while the people who made it were bringing ruinous defeat upon themselves.
This book describes the parallel lives of Athenian democracy and Athenian tragedy—how and why they concurrently arose, blossomed and died, shaped especially by a fatal Athenian penchant for war. The author, an actor visiting the Theater of Dionysos at Athens (where the Greek tragedies premiered), considers what hints time has left us of the life and death of Greek tragedy and of the three tragedians (Aeschylus, Sophocles and Euripides) some few of whose plays survive. He demonstrates how drama emerged from a fusion of four unique elements in Greek culture: bardic poetry; open sporting competition; uncodified religion; and exploratory philosophy. With glimpses of the authors, backers, performers and audiences who collectively created that astounding body of work, the book imagines the evolution of the tragic genre from a practitioner’s viewpoint.

Richard C. Sewell, AEA, a founding director of The Theater at Monmouth in 1970, directed and acted there until 1993. He taught directing and theater history for the Colby College Theater and Dance department from 1974 to 2001. He lives in Maine, writing and directing. His plays have had recent productions in New York, Los Angeles, and Las Vegas.

III. First Plays and Other Newness
Philosopher as Playwright      60
Suppliants, Persians and Seven      68

“Reading [this book] is like sitting down to a leisurely, open-ended chat—probably over a glass or two of scotch—with one of those passionate, marvelously well-informed, creative and freewheeling thinkers who manages also to be charming. There are insights here that I can’t wait to put to use in my next directing project, and enthusiasm here that rejuvenates the reader for the daily business of living a good life and/or doing good theatre.”—Shepard Sobel, Artistic Director, The Pearl Theatre Company, Inc. 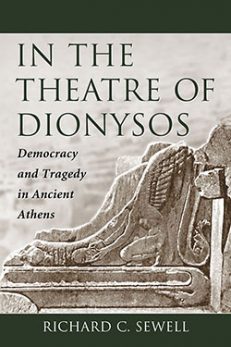 You're viewing: In the Theatre of Dionysos $35.00
Add to cart