In the Peanut Gallery with Mystery Science Theater 3000

Essays on Film, Fandom, Technology and the Culture of Riffing

The award-winning television series Mystery Science Theater 3000 (1988–1999) has been described as “the smartest, funniest show in America,” and forever changed the way we watch movies. The series featured a human host and a pair of robotic puppets who, while being subjected to some of the worst films ever made, provided ongoing hilarious and insightful commentary in a style popularly known as “riffing.” These essays represent the first full-length scholarly analysis of Mystery Science Theater 3000—MST3K—which blossomed from humble beginnings as a Minnesota public-access television show into a cultural phenomenon on two major cable networks. The book includes interviews with series creator Joel Hodgson and cast members Kevin Murphy and Trace Beaulieu.

Robert G. Weiner is associate humanities librarian at Texas Tech University. His work has been published in the Journal of Popular Culture, Public Library Quarterly, Journal of American Culture, International Journal of Comic Art and Popular Music and Society.

Shelley E. Barba is an associate librarian at Texas Tech University. She has published in such journals as College & Research Libraries, The Reference Librarian, and Texas Library Journal. She lives in Lubbock, Texas. 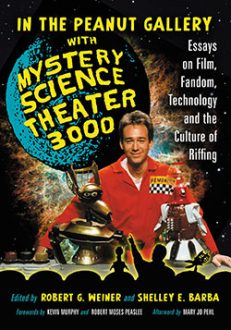 You're viewing: In the Peanut Gallery with Mystery Science Theater 3000 $35.00
Add to cart