View cart “Hood’s Texas Brigade in the Civil War” has been added to your cart.

Of the many infantry brigades in Robert E. Lee’s Army of Northern Virginia, John Bell Hood’s Texas Brigade earned the reputation as perhaps the premier unit. From 1862 until Lee’s surrender at Appomattox, the brigade fought in most of the major campaigns in the Eastern Theater and several more in the Western, including the Seven Days, Second Manassas (Second Bull Run), Sharpsburg (Antietam), Fredericksburg, Gettysburg, Chickamauga, Chattanooga, Knoxville, the Wilderness, Spotsylvania Court House, Cold Harbor, the siege of Richmond and Petersburg, and Appomattox.
Distinguished for its fierce tenacity and fighting ability, the brigade suffered some of the war’s highest casualties. This volume chronicles Hood’s Texas Brigade from its formation through postwar commemorations, providing a soldier’s-eye view of the daring and bravery of this remarkable unit.

Edward B. Williams (Ph.D., Texas A&M) is a military historian. He is the author of Rebel Brothers: The Civil War Letters of the Truehearts and has published articles in America’s Civil War, Aviation History, Southwestern Historical Quarterly, and Quarterly Journal of Military History. He served in the U.S. Marine Corps and holds the rank of Captain, U.S.N.R., (Ret).

“Williams has chronicled the exploits of this valiant fighting unit from its formation to its surrender and beyond in almost mind-numbing detail”—The Civil War Round Table; “peppered with numerous anecdotes relating how common soldiers experienced the ebb and flow of war”—Southwestern Historical Quarterly; “clearly a labor of love”—America’s Civil War; “this book is a first rate contribution to Confederate historiography, and it is likely to stand the test of time as the definitive, single-volume history of Hood’s Brigade”—Civil War News; “this is a labor of love…Williams has provided an entertaining narrative”—Civil War Book Review. 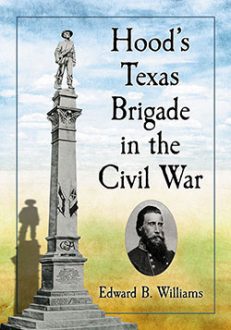 You're viewing: Hood’s Texas Brigade in the Civil War $39.95
Add to cart