Transgressive Sexuality and the Selling of the Movieland Dream

Between 1917 and 1941, Hollywood studios, gossip columnists and novelists featured an unprecedented number of homosexuals, cross-dressers, and adulterers in their depictions of the glamorous Hollywood lifestyle.
Actress Greta Garbo defined herself as the ultimate serial bachelorette. Screenwriter Mercedes De Acosta engaged in numerous lesbian relationships with the Hollywood elite. And countless homosexual designers brazenly picked up men in the hottest Hollywood nightclubs. Hollywood’s image grew as a place of sexual abandon.
This book demonstrates how studios and the media used images of these sexually adventurous characters to promote the industry and appeal to the prurient interests of their audiences.

Brett L. Abrams is an archivist with the National Archives and Records Administration, and author of Capital Sporting Grounds: A History of Stadium and Ballpark Construction in Washington, D.C., (McFarland, 2009).

Introduction: Bohemians in the Depictions of Hollywood      3

3. The Private Hollywood Party Secret Love at the Wild Party      78

5. Hollywood Behind the Scenes Glamour and Mystery in the Workplace      159

“an insightful and intriguing read”—Philadelphia Gay News; “handsomely written and well researched…delightful and engaging”—Femspec; “In Hollywood Bohemians, Brett Abrams has provided all film historians with a brand new take on Hollywood. This social study should be must reading for all scholars. Rather than simplistic assertions, Abrams offers documents that will be new to all.”—Douglas Gomery, Professor of Journalism and Film Studies Emeritus, University of Maryland and author of Shared Pleases: A History of Movie Presentation In the United States and the Hollywood Studio System: A History. 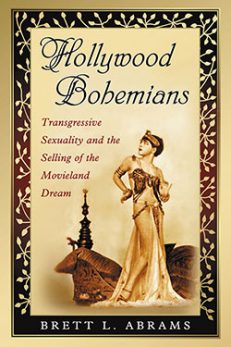