Essays on the Género Negro Tradition

The image of the hard-boiled private investigator from gritty pulp fiction, a terse and mysterious figure, has become increasingly universal as the detective novel crosses more and more borders. A booming genre in Latin America, Spain and other Hispanic cultures, detective fiction has transcended the limitations of its influences. Hispanic authors relatively new to the genre have published novels and series popular with the public, while a number of well-known writers have adapted the genre to reflect the concurrent globalization of modern society and the crimes within it.
This volume presents a compilation of 11 critical essays on género negro—contemporary detective fiction in the Hispanic and Luso-Brazilian canon. Surveying the last twenty years, the text analyzes emerging trends in this rapidly evolving genre, as well as the mutations and innovations taking place within the style. The first section of the book is dedicated to the detective fiction of Spain and Portugal. The second section surveys works from Latin America and the United States, where topics touch on universal subjects like crime, identity and feminism.

Renée W. Craig-Odders is associate professor of Spanish at the University of Wisconsin-Stevens Point. She is the author of several articles on Spanish detective fiction and lives in Plover, Wisconsin.
Jacky Collins is a senior lecturer in Spanish Studies at Northumbria University, Newcastle upon Tyne. She lives in the United Kingdom.
Glen S. Close is a professor of Spanish at the University of Wisconsin-Madison. He is the author of La imprenta enterrada. Arlt, Baroja y el imaginario anarquista and Contemporary Hispanic Crime Fiction. A Transatlantic Discourse on Urban Violence.

II : LATIN AMERICA AND THE UNITED STATES
8. The Detective Is Dead. Long Live the Novela Negra!      143
9. Private Detectives, Private Lives: The Detective Fiction of Sergio Gómez and Marcela Serrano      162
10. The Search for Identity: The Return to Analytic Detective Fiction in Mexico      180
11. Family, Identity and the Latina Private Investigator      204 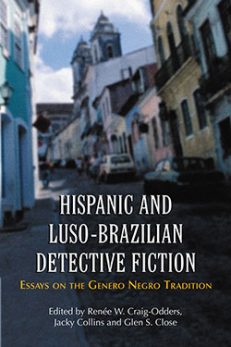 You're viewing: Hispanic and Luso-Brazilian Detective Fiction $49.95
Add to cart