View cart “Hazen “Kiki” Cuyler” has been added to your cart.

One of the greatest outfielders of his generation, Hazen “Kiki” Cuyler (1898–1950) was working as a roof assembler in an auto plant in Michigan when he seized an opportunity to realize his dream of playing major league baseball. After toiling in the minor leagues for more than three years, he took the National League by storm and became a legitimate star during his 1924 rookie season with Pittsburgh. Considered one of the fastest and smartest base runners of his era, Cuyler played for four National League pennant winners and participated in three World Series over his career, earning election to the Baseball Hall of Fame in 1968. This definitive biography chronicles Cuyler’s life and career, including his dispute with Pirate manager Donie Bush and his subsequent trade to Chicago in 1928.

Ronald T. Waldo, a member of the Society for American Baseball Research, lives in Pittsburgh. His articles have appeared in Pittsburgh Pride Magazine and Sports Collectors Digest, and he is the author of several books on baseball history.

1 • Growing Up in Harrisville 5 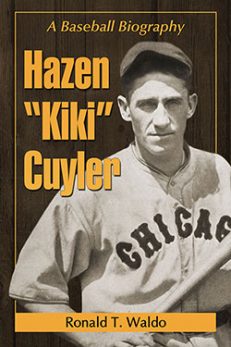