The Life and Perennial Candidacy of the Progressive Republican

In 1938 Harold E. Stassen was elected governor of Minnesota at age 31, an office he resigned in 1943 to enter the United States Navy at the height of World War II. In the postwar years he helped write the charter of the United Nations and, serving in the Eisenhower administration, very nearly achieved a nuclear test ban treaty with the Soviet Union. He is famously known as a perennial candidate for the Republican Party nomination for president, seeking it 10 times between 1944 and 1992.

The late Alec Kirby was an associate professor of history and government at the University of Wisconsin-Stout.
David G. Dalin, a professor of history and politics at Ave Maria University in Florida, is the author, co-author or editor of ten books.
John F. Rothmann is on the faculty of the Fromm Institute at the University of San Francisco and is a talk show host on News Talk 910 AM in San Francisco.

4. Preparing for the Pilgrimage 37

16. The Nomination of Dwight Eisenhower 145

23. Into the Shadows: The Perennial Candidate 195

24. Stassen and the Failure of the Liberal Republican Vision 208

“Useful…valuable”—San Francisco Chronicle; “This long-overdue study of the ambitious former Minnesota governor explains how his undeniable intelligence and ability were overshadowed by an outsized ego that left no room for introspection or self-criticism. The highlight of the book is an illuminating, blow-by-blow description of Stassen’s misguided and politically fatal attempt, while working in the Eisenhower administration, to seek an unauthorized break-through during 1957 disarmament talks with the Russians.”—James Worthen, author of The Young Nixon and His Rivals: Four California Republicans Eye the White House, 1946–1958; “Kirby, Dalin and Rothmann have delivered the definitive biography of Harold Stassen, a cautionary tale of what befalls a politician who triumphs all too easily when all too young. Stassen might well have taken the GOP in a more liberal direction. He certainly came close in spring of 1948. How he got to that point and what happened following it are revealed in these pages. Essential reading in understanding the Republican Party of the 1940s and invaluable in understanding how the GOP got to be where it is today.”—David Pietrusza, political historian and author; “Kirby, Dalin and Rothmann have written a splendid book about Harold E. Stassen. This volume fills a void in understanding an important political force in the Republican Party in the 1940s and 1950s. The authors bring Stassen to life in this important political biography.”—James J. Kiepper, author of Styles Bridges Yankee Senator; “Stassen was one of the greatest statesmen of the 20th century in both the national and international arenas. He nearly captured the Republican nomination for President in 1948 and might have been elected if he had been nominated that year. Stassen has been ridiculed and long forgotten. With this book by Kirby, Dalin and Rothmann, Stassen’s rightful place in American history is now assured.”—Phil Willkie, grandson of Wendell L. Willkie, the Republican nominee for President in 1940; “This detailed and well-wrought book tells a story of classical dimensions. An intelligent, gifted, ambitious young politician, who seemed destined for the highest office in the United States, and achieved high office as a young man, devolved into a lonely old man, scurrying about with a few assistants, still seeking the Republican nomination for president. Harold Stassen ran 10 times-perhaps a record. The authors tell a tragic story which could be compared to the story of Lear, howling in the wilderness.”—Herbert Gold, author of Fathers and Haiti: Best Nightmare on Earth; “I enjoyed it…. Congratulations; you’ve produced a work as readable as it is reliable. And you were fair, in some cases more than fair. Above all, you take Stassen seriously, and make it that much harder for everyone else not to.”—Richard Norton Smith, former director of the Abraham Lincoln, Herbert Hoover, Dwight Eisenhower, Gerald Ford and Ronald Reagan presidential libraries./ 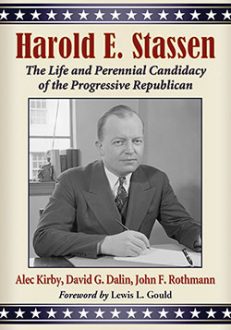