View cart “Hang ’Em High” has been added to your cart.

Law and Disorder in Western Films and Literature

For more than a century the Western film has proven to be an enduring genre. At the dawn of the 20th century, in the same years that The Great Train Robbery begat a film genre, Owen Wister wrote The Virginian, which began a new literary genre. From the beginning, both literature and film would usually perpetuate the myth of the Old West as a place where justice always triumphed and all concerned (except the villains) pursued the Law. The facts, however, reflect abuses of due process: lynch mobs and hired gunslingers rather than lawmen regularly pursued lawbreakers; vengeance rather than justice was often employed; and even in courts of law justice didn’t always prevail. Some films and novels bucked this trend, however. This book discusses the many Western films as well as the novels they are based on, that illustrate distortions of the law in the Old West and the many ways, most of them marked by vengeance, in which its characters pursued justice.

Writer, actor and comedian Bob Herzberg is the author of scholarly books and western novels. He lives in Brooklyn, New York.

2. International Hangmen: 1940–1949—War in the Present and Totalitarian Behavior in the Old West 35

• “Highly recommend[ed]”—True West
• “﻿The author has a witty style, somewhat reminiscent of Mystery Science Theater, so his commentary is enjoyable…the book is fun to read”—The Journal for the Wild West History Association 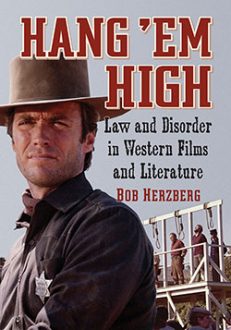