Charles “Gus” Dorais (1891–1954) was the quarterback of Notre Dame’s “Dorais to Rockne” tandem that revolutionized football’s forward pass. A triple threat prep star from Chippewa Falls, Wisconsin, Dorais was a captain and undefeated four-year starter at Notre Dame, and the school’s first consensus All-American in 1913.
Over the next four decades, Dorais was a professional player in the pre–NFL days and a college football coach—notably at the University of Detroit—and then head coach of the Detroit Lions. During his career, he tallied more than 150 wins. A pioneer of offensive strategies, Dorais played with and coached against most of the prominent football legends of his time.

Joe Niese is an award-winning author and a library director. He lives in Gus Dorais’ hometown, Chippewa Falls, Wisconsin.
Bob Dorais is Gus Dorais’ grandson and has researched and collected information about Gus for years. He lives in Malvern, Pennsylvania. More information can be found at: http://www.gusdorais.com.

• “Well written and authoritative biography. The authors have done a splendid job of describing an era in football when it was undergoing significant change and following the life of a payer and later a coach who was responsible for many of those changes.”—Michigan in Books

• “Gus Dorais was one of football’s early pioneers. From his humble beginnings to his influence on the sport as a player, scout and coach, this well-researched and well-written account of Dorais’s life is fascinating. The story of a football lifer that is long overdue.”—Chris Willis, Head of Research Library, NFL Films 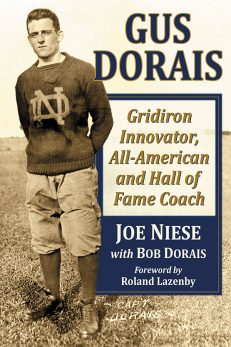