In 1861, Colonel Grenville Dodge organized the 4th Iowa Volunteer Infantry Regiment and led them off to war. They had few uniforms or weapons and were more of a mob than a military unit, but Dodge shaped them into a fighting force that won honors on the battlefield and gained respect as one of the best regiments in the Union army.
Promoted to the rank of major-general, Dodge became one of the youngest divisional, corps and departmental commanders in the Army. A superb field general, he also organized a network of more than 100 spies to gather military intelligence and built railroads to supply the troops in the Western Theater. This book covers Dodge’s Civil War career and the history of the 4th Iowa, who fought at Pea Ridge, Vicksburg, Chattanooga and Atlanta. 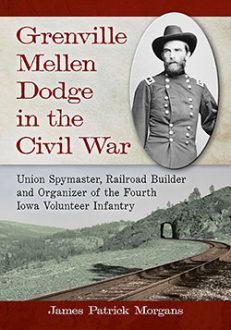 You're viewing: Grenville Mellen Dodge in the Civil War $29.95
Add to cart