Governor Edward Coles and the Vote to Forbid Slavery in Illinois, 1823–1824

His greatest work began as a misinterpretation. Edward Coles, former Virginian aristocrat and future governor of Illinois, began his move westward under the impression that the Northwest Ordinance straightforwardly banned slavery in all territories north of the Ohio River. This impression, however, was much more absolute in law than it ever was in fact. The reality of the situation was that slaveholders moved to territories such as Illinois and brought their lifestyle with them. So-called indentured servants, whose condition was supposedly a result of their own choices, were often simply slaves by another name. Having freed his slaves (some of whom nevertheless chose to remain with him) once he reached northern territory, Coles was appalled at the reality he found upon reaching his destination. A confirmed abolitionist, Cole soon set in motion one of the first true anti-slavery campaigns in the United States, resulting in a referendum that would ban slavery from Illinois once and for all.
This biographical volume details the life and times of Illinois’ second governor, the “improbable” Edward Coles. The book discusses his Virginian roots and his associations with men such as Thomas Jefferson and James Madison. It traces the motivations and circumstances which led a man with a confirmed Southern upbringing and definitive political connections to break the mold and uphold his unpopular moral beliefs. The main focus of the work, however, is Coles’ work against slavery in Illinois. His political campaign, his lifestyle and his critics are all discussed. Views from contemporaries, who saw Coles as “a man who made a great thing happen,” place Coles within the political atmosphere of the day and belie the neglect which he received in later years. Coles own writings add a personal note to an otherwise forgotten political story. A number of period photographs and an index are included.

David Ress is an investigative reporter and staff writer with the Richmond Times-Dispatch. He lives in Richmond, Virginia. 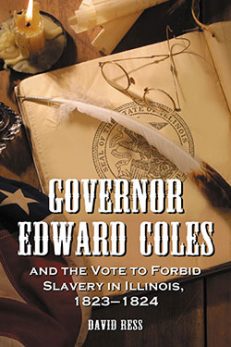