Essays on Alternative Christianity in Literature and Popular Culture

When computers freeze, they are “rebooted” and soon working properly again. Similarly, legendary thinkers throughout history have argued that Christianity should start fresh by recapturing the humanitarian spirit of Jesus’ original message. These include such disparate individuals as Thomas Jefferson, Oscar Wilde, Charles Dickens, Walt Whitman, Friedrich Nietzsche, Leo Tolstoy, George Bernard Shaw, and the religious leaders of the Occupy Wall Street movement. Surprisingly enough, even classic television shows and films meant to be entertaining—Lost, Battlestar Galactica, It’s a Wonderful Life, Groundhog Day, Decalogue, and A Charlie Brown Christmas—are attempts to apply the basic principles of Christianity to modern times. This book offers new essays by scholars of literature, film, history, theology and philosophy examining how various thinkers and storytellers over time have conceived of a reinvented Christianity. In confronting this controversial idea, this book examines how unorthodox interpretations of the Bible can be some of the most valid, how visions of Jesus as a revolutionary may be the most historically sound, and how compassionate Christians such as Origen have wrestled with the eternal questions of the existence of evil, the gift of free will and the promise of universal salvation.

Marc DiPaolo is an assistant professor of English at Southwestern Oklahoma State University. He has written books on Jane Austen and on environmentalist science fiction and fantasy. DiPaolo has been interviewed on NPR, BBC4, and appeared in the AMC documentary Robert Kirkman’s Secret History of Comics.

Part II. Angels and Demons Among Us: The Politics and Economics of Heaven and Hell in Popular Culture
The Gospel According to Comic Strips: On Peanuts and The Far Side  (Eric Michael Mazur) 143
Religious Discourse in Lost and Battlestar Galactica (Val Nolan) 162
The Radical Theology of Krzysztof Kieslowski’s Decalogue (Matthew Yde) 180
Fanaticism and Familicide from Wieland to The Shining (Dara Downey) 199
From Bedford Falls to Punxsutawney: Refashioning A Christmas Carol (Grace Moore) 221
Reclaiming the Relation of Religion, Politics, and Economics (Joerg Rieger) 239 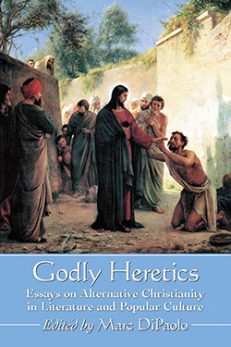