An Alliance That Began the French and Indian War

George Washington and the Half-King Chief Tanacharison details the events in western Pennsylvania that precipitated the French and Indian War. It describes the interpersonal relationship between 22-year-old, inexperienced, but self-assured George Washington and the 54-year-old wily Iroquois Chief Tanacharison, which led to, as Horace Walpole quipped, Washington firing “a volley in the backwoods of America that set the world on fire.”
The book explores the history of the French and English rivalry for the trans–Allegheny territory and its impact on the Indians in the area. It shows how Washington and Tanacharison each sought to influence the other to gain support for their respective agendas. Washington wanted the Indians to endorse Virginia’s claim to the Ohio territory, while Tanacharison wanted a war between England and France so that the Iroquois could maintain their dominance over the Ohio Indians. The book describes in detail the sequence of events through which the crafty half-king manipulated Washington into starting the war he wanted, and by his actions implicated Washington in nothing less than a cold-blooded murder.

Paul R. Misencik is a former airline captain and retired division chief of the U.S. National Transportation Safety Board (NTSB). He is a member of the First Virginia Regiment of the Continental Line, a living history foundation. He lives in Reston, Virginia. 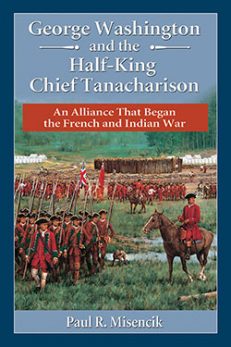 You're viewing: George Washington and the Half-King Chief Tanacharison $35.00
Add to cart