Forts of the United States

From forts to blockhouses, garrison houses to trading posts, stations to presidios, missions to ranches and towns, this work provides a history of the primary fortifications established during 400 tumultuous years in what would become the United States of America. Under each state’s heading, this substantial volume contains alphabetized entries with information regarding each structure’s history. The earliest forts established by the Danes, Dutch, English, French, Portuguese, Swedes and Mexicans and by the temporary appearance of the Russians are listed. The colonial American forts, many of which were previously established by the European powers, are covered in detail. Beginning with the American Revolution, each of the American military fortifications, militia forts, settlers’ forts and blockhouses is listed and described. Helpful appendices list Civil War defenses (and military hospitals) of Washington, D.C.; Florida Seminole Indian war forts; Pony Express depots; Spanish missions and presidios; and twentieth-century U.S. forts, posts, bases, and stations. A chronology of conflicts that paralleled the growth of the United States is also provided, offering insight into the historical context of fort construction.

Forts of the United States
(Arranged by State or Territory)      5

• “A wealth of information…valuable”—The Library of Virginia

• “Hannings has hit another home run…exhaustively researched and meticulously documented…superb…backs up his text with an exhaustive, detailed bibliography…an even-handed approach to history, neither slighting nor favoring individual states or the factions that are now interwoven as the fabric of our military history…a remarkable book, and one that deserves to find an audience beyond libraries…middle and high school students will gain an appreciation of their own local history by completing assignments and reports that draw upon Bud Hannings’s sources…. Buy it, read it, treasure it, and pass it down to your children and grandchildren”—Infantry Magazine 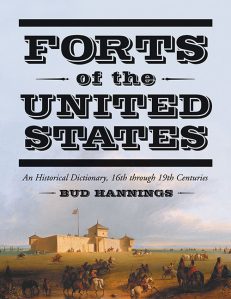 You're viewing: Forts of the United States $49.95
Add to cart