View cart “Fighting Irish in the American Civil War and the Invasion of Mexico” has been added to your cart.

As mid–19th century America erupted in violence with the invasion of Mexico and the outbreak of the Civil War, Irish immigrants joined the fray in large numbers, on both sides. They sometimes were disruptive elements. In Mexico, a body of Irish artillerymen defected to the other side. During the Civil War, Patrick Cleburne stirred controversy in the Confederacy when he proposed enlisting slaves in exchange for their freedom. The New York draft riots, a violent insurrection by a predominantly Irish mob, raged for three days before Federal troops restored order. Despite turmoil and contention, the Irish soldiers who fought in the Union army contributed significantly to the preservation of the United States. This collection of essays examines the involvement of Irish men and women in America’s conflicts from 1840 to 1865.

Arthur H. Mitchell is a distinguished professor of history at the Salkehatchie Campus of the University of South Carolina. He lives in Allendale, South Carolina. 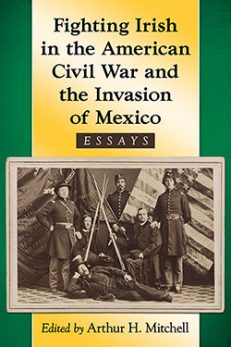 You're viewing: Fighting Irish in the American Civil War and the Invasion of Mexico $29.95
Add to cart