View cart “Fan Fiction and Fan Communities in the Age of the Internet” has been added to your cart.

Fan Fiction and Fan Communities in the Age of the Internet

Fans have been responding to literary works since the days of Homer’s Odyssey and Euripedes’ Medea. More recently, a number of science fiction, fantasy, media, and game works have found devoted fan followings. The advent of the Internet has brought these groups from relatively limited, face-to-face enterprises to easily accessible global communities, within which fan texts proliferate and are widely read and even more widely commented upon. New interactions between readers and writers of fan texts are possible in these new virtual communities. From Star Trek to Harry Potter, the essays in this volume explore the world of fan fiction—its purposes, how it is created, how the fan experiences it. Grouped by subject matter, essays cover topics such as genre intersection, sexual relationships between characters, character construction through narrative, and the role of the beta reader in online communities. The work also discusses the terminology used by creators of fan artifacts and comments on the effects of technological advancements on fan communities.
Instructors considering this book for use in a course may request an examination copy here.

Karen Hellekson is a freelance copy editor and independent scholar. She is coeditor of the open access journal Transformative Works and Cultures and of the quarterly SFRA Review. She lives in Maine.

Kristina Busse teaches at the University of South Alabama and has published a variety of essays on fan fiction and fan culture. She is the founding coeditor of Transformative Works and Cultures.

A Brief History of Media Fandom  41

1. Archontic Literature: A Definition, a History, and Several Theories of Fan Fiction  61

3. Intimatopia: Genre Intersections Between Slash and the Mainstream   97

4. The Toy Soldiers from Leeds: The Slash Palimpsest  115

7. The Audience as Editor: The Role of Beta Readers in Online Fan Fiction Communities  171

9. My Life Is a WIP on My LJ: Slashing the Slasher and the Reality of Celebrity and Internet Performances  207

PART IV—MEDIUM AND MESSAGE: FAN FICTION AND BEYOND

12. From Shooting Monsters to Shooting Movies: Machinima and the Transformative Play of Video Game Fan Culture  261 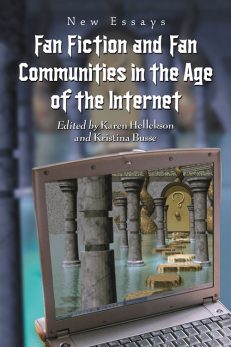 You're viewing: Fan Fiction and Fan Communities in the Age of the Internet $29.95
Add to cart