The all-new essays in this book respond to the question, How do spaces in science fiction, both built and unbuilt, help shape the relationships among humans, other animals and their shared environments? Spaces, as well as a sense of place or belonging, play major roles in many science fiction works. This book focuses especially on depictions of the future that include, but move beyond, dystopias and offer us ways to imagine reinventing ourselves and our perspectives; especially our links to and views of new environments. There are ecocritical texts that deal with space/place and science fiction criticism that deals with dystopias but there is no other collection that focuses on the intersection of the two.

Part One. In the Margins: Recentering Individuals, Societies and Environments
Heterotopian Possibilities in Science Fictions by Stephen Baxter, Terry Pratchett, Samuel Delany and Ursula K. Le Guin (Lauren J. Lacey) 10
Acceptance of the Marginalized in Marge Piercy’s He, She, It and Melissa Scott’s Trouble and Her Friends (Melanie A. Marotta) 28
Anathem’s Flows of Power: State Space and Nomadology on a Cloistered Planet (Jonathan P. Lewis) 46

Part Three. Re-Viewing Damaged Worlds Through Quests
Underworlds of Despair and Hope in Cormac McCarthy’s The Road (Justin T. Noetzel) 120
The Silence of the Subaltern: The Rejection of History and Language in Amitav Ghosh’s The Calcutta Chromosome (Shayani Bhattacharya) 137
A Case of Terraphilia: Longing for Place and Community in Philip K. Dick’s Do Androids Dream of Electric Sheep? (Susan M. Bernardo) 154
Discursive Transgressions and Ideological Negotiations: From Orwell’s 1984 to Butler’s Parable of the Sower (Keith Elphick) 171

“the book’s diversity makes it relevant to a wide readership…adds to the field in thought-provoking ways”—Foundation: The International Review of Science Fiction. 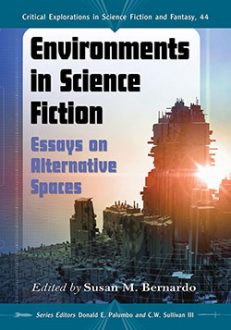 You're viewing: Environments in Science Fiction $29.95
Add to cart