The 1916 silent film Cenere (Ashes) features the great Italian actress Eleonora Duse (1858–1924) in her only cinematic role. In her meditative approach to her craft, she reprised for the screen all the “mother roles” she had created for the theater.
Marking the film’s 100th anniversary, this collection of essays brings together for the first time in English a range of scholarship. The difficulties involved in the making of the film are explored—Duse’s perfectionism was too advanced for the Italian movie industry of the 1910s. Her work is discussed within the creative, political and historical context of the silent movie industry as it developed in wartime Italy.

Maria Pia Pagani is an adjunct professor of theatrical literature, art of directing and theatre discipline at the University of Pavia (Italy). She has written many essays—in Italian, English, Russian—about Duse. She is a member of the Pen Club International and the managing editor for Italy in “The Theatre Times,” a portal for global theatre news.
Paul Fryer is an academic, author, editor and researcher, based in Kent (UK). He has lectured and presented film screenings internationally and is a visiting professor at the Universities of Leeds, London South Bank and East London.

Eleonora Duse and the Fall of the European Tradition of Acting:

Duse and the Stanislavsky System of Acting (Sharon Marie Carnicke) 56

The Work of the Actor Febo Mari (Francesca Brignoli) 109

to Her Daughter Enrichetta Maria (Ida Bigg) i127

Appendix B. Grazia Deladda, Voice of Sardinia: The First Italian 153

Woman to Receive the Nobel Prize in Literature (Anders Hallengren) 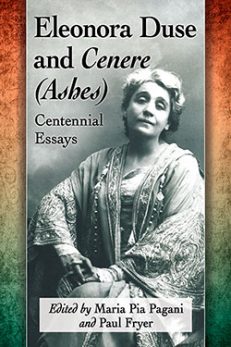 You're viewing: Eleonora Duse and Cenere (Ashes) $65.00
Add to cart