One of the most prolific crime writers of the last century, Evan Hunter published more than 120 novels from 1952 to 2005 under a variety of pseudonymns. He also wrote several teleplays and screenplays, including Alfred Hitchcock’s The Birds, and the 1954 novel The Blackboard Jungle. When the Mystery Writers of America named Hunter a Grand Master, he gave the designation to his alter ego, Ed McBain, best known for his long-running police procedural series about the detectives of the 87th Precinct. This comprehensive companion provides detailed information about all of Evan Hunter’s/Ed McBain’s works, characters, and recurring themes. From police detective and crime stories to dramatic novels and films, this reference celebrates the vast body of literature of this versatile writer.

Erin E. MacDonald is a professor of English at Fanshawe College’s School of Language and Liberal Studies in London, Ontario. She published a literary companion book on Ed McBain and is writing one on Ian Rankin. Her articles have appeared in the Journal of American and Comparative Cultures and in Clues.
Series Editor Elizabeth Foxwell, an Agatha Award winner, is managing editor of Clues: A Journal of Detection. 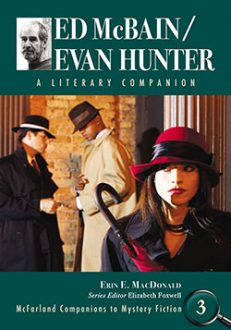