A Room-by-Room Tour of the House in Horror Movies

Throughout cinematic history, the buildings characters inhabit—whether stately rural mansions or inner-city apartment blocks—have taken on extra dimensions, often featuring as well developed characters themselves. Nowhere is this truer than in the horror film, where familiar spaces—from chaotic kitchens to forgotten attics to overgrown greenhouses—become settings for diabolical acts or supernatural visitations.
Showing readers through a selection of prime movie real estate, this book explores how homes come to life in horror with an analysis of more than sixty films, including interviews and insights from filmmakers and scholars, along with many rare stills. From the gruesome murder in the hallway of The House by the Cemetery (1981) to the malevolent haunting in the nursery of Eel Marsh House in The Woman in Black (2012), no door is left unopened.

Cleaver Patterson is an author, journalist, and film critic based in South West London. He has written for numerous periodicals including The Sunday Times Magazine, Rue Morgue, Scream, Starburst and Video Watchdog.

• “An engrossing tour, room-by-room, of the standard house in a horror movie…a must-own for diehard horror fans, and it’s illustrated with some very nice black and white stills”—Starburst Magazine 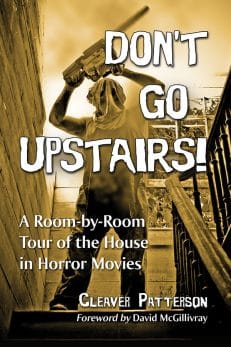