Frank Herbert’s Dune is one of the most well-known science fiction novels of all time, and it is often revered alongside time-honored classics like The Lord of the Rings. Unlike Tolkien’s work, the Dune series has received remarkably little academic attention. This collection includes fourteen new essays from various academic disciplines—including philosophy, political science, disability studies, Islamic theology, environmental studies, and Byzantine history—that examine all six of Herbert’s Dune books. As a compendium, it asserts that a multidisciplinary approach to the texts can lead to fresh discoveries. Also included in this collection are an introduction by Tim O’Reilly, who authored one of the first critical appraisals of Herbert’s writings in 1981, and a comprehensive bibliography of essential primary and secondary sources.

Dominic Nardi is a political scientist and has published academic articles about politics in Lord of the Rings, Star Trek, and Blade Runner.

N. Trevor Brierly is a literature scholar and software engineer living in Northern Virginia. He has published and presented on Dune, Tolkien, worldbuilding, Shakespeare, and Northrup Frye.

Part I. Politics and Power
Dune and the Metanarrative of Power
Edward John Royston 13
Political Prescience: How Game Theory Solves the Paradox of Foreknowledge
Dominic J. Nardi 29
“The greatest predator ever known”: The Golden Path and Political Philosophy as Ecology
Michael Phillips 46
He Who Controls Knowledge Controls the Universe: Leto II and the Golden Path
Caroline Anne Womack 64

Part IV. Philosophy, Choice, and Ethics
The Sands of Time: Dune and the Philosophy of Time
Nathaniel Goldberg 195
The Choices of Muad’Dib: Goods, Traditions, and Practices in the Dune Saga
Jeffery L. Nicholas 210
“I suggest you may be human”: Humanity and Human Action in Dune
Curtis A. Weyant 228
Belief Is the ­Mind-Killer: The Bene Gesserit’s Transcendental Pragmatism
Kevin Williams 244

• “Discovering Dune: Essays on Frank Herbert’s Epic Saga offers a welcome addition to critical analyses of Herbert’s Dune series. Spanning topics from politics, history, and religion to science, technology, and philosophy, this collection of essays brings fresh perspectives to bear on this best-selling science fiction universe. Some authors take advantage of new analytical approaches, such as using game theory to explore prescience or discussing Paul Atreides through the lens of disability studies. Others focus on characters and themes that deserve extended critical attention, including Princess Irulan, Leto II, and Arabic and Islamic influences. As a whole, the collection presents itself as relevant to 21st-century concerns and will likely prompt readers to want to reread the series equipped with new insights. We need more thoughtful engagements with all of the books in Herbert’s epic saga, and this essay collection delivers.”—Kara Kennedy, author, Women’s Agency in the Dune Universe

• “A welcome addition to the scholarship on the Dune novels. Seeing them refracted through this volume’s diversity of critical approaches and disciplinary lenses is valuable for everyone.”—Joshua Pearson, California State University, Los Angeles 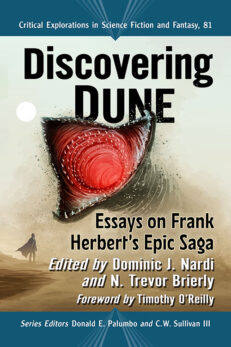