A Study of Directed Energy Weapons in Fact, Fiction and Film

Death rays! Absurd idea peddled by con artists and amateurs and promoted by a sensationalist press? Not quite. Government and military leaders and mainstream scientists endorsed the possibility of such a fantastic weapon in the years before World War II.
A concept born out of research with electricity and other energy sources, the death ray or “directed energy weapon” was widely reported for nearly five decades. Claims for its invention appeared as early as 1876, and increased thereafter, until the “death-ray craze” of the 1920s and 1930s. The idea influenced fiction, making its way from newspapers and magazines into novels, short stories, films, theatrical productions and other media. This book takes a first-ever look at the historical death ray and its impact on fiction and popular culture.

William J. Fanning, Jr., teaches history at All Saints’ Episcopal School in Fort Worth, Texas, and has written for the Journal of Military History. His primary research area has been the German army in World War II.

Part I: The Historical Death Ray

4. Death Rays and Their Connection to the Second World War   106

Part II: The Death Ray in Fiction and Popular Culture

6. Death-Ray Novels and Short Stories of the Interwar Years   149

“in addition to scholars of popular fiction, and especially detective, crime, and science fiction, military historians interested in next war projections and the intersection of popular culture and military concerns will also find it useful”—H-Net; “a wealth of information…a fine volume”—SFCrowsnest. 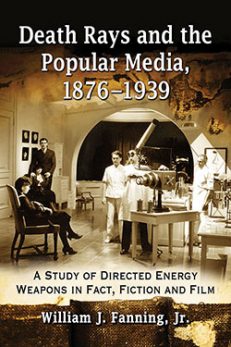