The Eighty-Five Games of Their Six Chess Matches, with Excerpts from Additional Games Against Other Opponents

The meeting of Louis Charles Mahé de la Bourdonnais and Alexander McDonnell at London’s Westminster Chess Club in 1834 was notable for a number of reasons. Hard-earned reputations were zealously protected, and masters of equal standing had seldom faced each other on even terms. The chess world was watching closely, but it was the actions of spectator William Greenwood Walker, who recorded each move of the 85 games, that has had the greatest impact.
This recording and publication of game scores from a series of matches between masters was a first in chess history: The event gave birth to modern chess theory. Once based upon composed exercises studied in isolation, theory now became concrete and measurable. Practice replaced contrivance, and tactics could be studied and honed in light of the avalanche of match records that followed.
McDonnell and de la Bourdonnais played six matches in 1834. This book offers biographies of the two and illuminates their times—and then the 85 games are analyzed using modern theory; there are numerous diagrams and previously published commentary. The merits of the openings, middle- and endgame maneuvers of the two are weighed. Nine appendices present selected games against other opponents; excerpt a contemporary account of the games’ ambience; provide other interesting documents; present several statistics; and provide a schematic of mistakes made by both contestants. Bibliography, notes, indexes.

Cary Utterberg lives in Golden Valley, Minnesota. He has held the National Master title with the U.S. Chess Federation since 1985.

On the Spelling of the Two Opponents’ Names      5

Appendix 8: Preface to Greenwood Walker’s Games by the 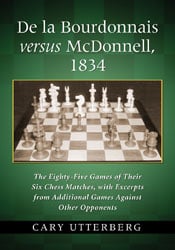