A Life in Choreography and the Art of Dance

Daniel Lewis’s legacy as a hugely influential choreographer and teacher of modern dance is celebrated in this biography. It showcases the many roles he played in the dance world by organizing his story around various aspects of his work, including his years at the Juilliard School, dancing and touring with the José Limón Company, staging Limón’s masterpieces around the world, directing his own company (Daniel Lewis Dance Repertory Company), writing and choreographing operas and musicals, and his years as dean of dance at New World School of the Arts. His life has spanned a particular period of growth of modern and contemporary dance, and his biography gives insight into how the artistic and journalistic perspectives on modern dance were influenced by what was occurring in the broader dance and arts communities. The book also offers rarely seen photographs and interviews with unique perspectives on many dance luminaries.

Donna H. Krasnow is professor emerita in the department of dance at York University in Toronto, Canada where she has a distinguished career as a dancer, teacher, choreographer, researcher, and author. She founded the dance school Dance Source and its resident company Möbius in San Francisco. She lives in Lincoln, California.

Daniel E. Lewis was a teacher and assistant director of the Dance Division at the Juilliard School for twenty years. He was then dean of dance at New World School of the Arts from 1987-2011. He was a soloist with master modern dancer José Limón from 1962-1974, serving as artistic director of the Limón Company from 1972-1974, and staging Limón’s choreography on major companies around the world. He lives in Miami, Florida.

• “Daniel Lewis’ autobiography is more than an important text of dance history; it reveals a unique glimpse into the world of American modern dance through the lens of his charmed and impressive career.”—Alicia Graf Mack, Director of the Dance Division, The Juilliard School

• “Written by one of the great multi-taskers of American modern dance, this book is a unique blend of autobiography, a relatively unexamined recent dance history, and what goes into performing, choreographing and dance administration.”— Jennifer Dunning, dance writer for the New York Times, and author of books on ballet and modern dance

• “Dancer, choreographer, teacher and visionary, Daniel Lewis has contributed greatly to an exciting era of American dance. This chronicle evokes some of the many fascinating people he’s encountered during a long and productive career.”—Jack Anderson, New York correspondent, Dancing Times (London); founding co-editor Dance Chronicle; and contributor to New York Times and other publications 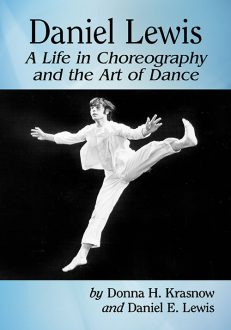