Currents of Comedy on the American Screen

How Film and Television Deliver Different Laughs for Changing Times

This book analyzes the evolution of film and television comedy from the 1930s through the present, defining five distinct periods and discussing the dominant comedic trends of each. Chapters cover the period spanning 1934 to 1942, defined by screwball comedies that offered distraction from the Great Depression; the suspense comedy, reflecting America’s darker worldview during World War II; the 1950s battle-of-the-sexes comedy; the shift from the physical, exaggerated comedy of the 1950s to more realistic plotlines; and the new suspense comedy of the 1970s and 1980s, focusing on the popular “dumb cop” or “dumb spy” series along with modern remakes including 2006’s The Pink Panther and 2008’s Get Smart.

ONE. Laughing During Troubled Times: The Art of Screwball Comedy      25
TWO. Film Comedy Highlights the Dark Side of American Life      50
THREE. Film and Television Comedy Takes a Feminist Perspective on American Life      77
FOUR. The Ultimate Reality-Based Television Sitcom? The Dick Van Dyke Show Revisited      151
FIVE. The Resurrection of Suspense Comedy Since the 1980s      174

“A truly exceptional look at comedy and its relation to the audience”—Rogue Cinema. 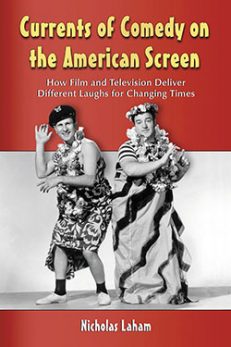 You're viewing: Currents of Comedy on the American Screen $35.00
Add to cart