Cougars of Any Color

The Integration of University of Houston Athletics, 1964–1968

After years of playing sub-par teams in weak athletic conferences, the University of Houston athletic program sought to overcome its underdog reputation by integrating its football and basketball programs in 1964. Cougar coaches Bill Yeoman and Guy V. Lewis knew the radical move would grant them access to a wealth of talented athletes untouched by segregated Southern programs, and brought on several talented black athletes in the fall semester, including Don Chaney, Elvin Hayes, and Warren McVea. By 1968, the Cougars had transformed into an athletic powerhouse and revolutionized the nature of collegiate athletics in the South.
This book gives the Cougars athletes and coaches the recognition long denied them. It outlines the athletic department’s handling of the integration, the experiences of the school’s first black athletes, and the impact that the University of Houston’s integration had on other programs.

Katherine Lopez is an assistant curator of education at Blaffer Gallery, Art Museum of the University of Houston in Texas. She lives in Houston. 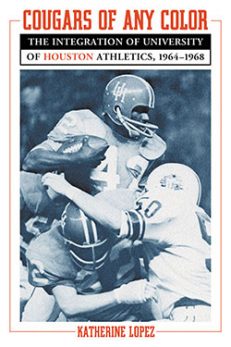