View cart “Coppola’s Monster Film” has been added to your cart.

The Making of Apocalypse Now

In 1975, after his two Godfather epics, Francis Ford Coppola went to the Philippines to film Apocalypse Now. He scrapped much of the original script, a jingoistic narrative of U.S. Special Forces winning an unwinnable war. Harvey Keitel, originally cast in the lead role, was fired and replaced by Martin Sheen, who had a heart attack. An overweight Marlon Brando, paid a huge salary, did more philosophizing than acting. It rained almost every day and a hurricane wiped out the set. The Philippine government promised the use of helicopters but diverted them at the last minute to fight communist and Muslim separatists.
Coppola filmed for four years with no ending in the script. The shoot threatened to be the biggest disaster in movie history. Providing a detailed snapshot of American cinema during the Vietnam War, this book tells the story of how Apocalypse Now became one of the great films of all time.

Steven Travers, a former professional baseball player with the St. Louis Cardinals and the Oakland A’s, is the author of 30 books and has written for the Los Angeles Times, StreetZebra magazine and the San Francisco Examiner. A USC graduate, he lives in California. 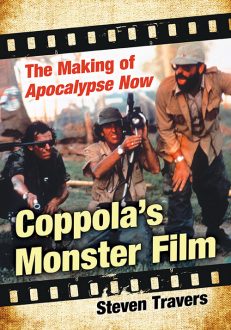