The vast majority of soldiers and sailors fighting in World War II did not engage the enemy directly. Indeed, for every infantryman actually fighting, eight others were supporting him—driving trucks laden with food and ammunition, securing captured areas, servicing the machinery of war, and manning desks.
This is the story of two enlisted men who served in the Pacific war zone in a support capacity. Theirs is not a tale of blood and fighting; instead it is the story of how they adjusted to the routine of war and the relationships they formed with their comrades.

The late Carl M. Becker lived in Miamisburg, Ohio.
Robert G. Thobaben is a professor emeritus of Political Science at Wright State University in Dayton, Ohio. He was a PFC in the 111th Infantry Regiment and participated in three campaigns (the Gilbert, Marshall and Palau Islands). 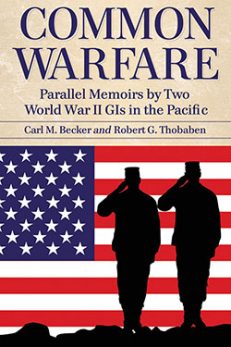